Apart from the Wakefield twins, these are my next favorite twins (well my Rosians are also awesome;) )

The first series I read about them is the famous “Two of a kind” series. That was also during grade 6, from the school Library. I think it was part 10, “Winner take all” I read first. This series is awesome. They go to an all-girls Boarding school, named White Oak Academy in New Hampshire. I have dreamt of going to a boarding school back then. It will like a childhood version of college.

I think there are 40 episodes in this series and I read almost all of them. Their lives are really lovely. Waking up in the dorm room, running to the bathroom down the hall, trying not be late for the morning announcements from the Headmistress and waiting eagerly for breakfast. Oatmeal is a tradition in that old school so everyday it’s a new flavor. I don’t think Oatmeal is that delicious but the story book made me want to eat it.

I love the cooking sessions of Ashley, midnight snooping, and the pizza parties in the dorm. Plus, the holiday celebrations of the school are pretty fun parts to read as well. But I hate the bully, Dana Woltezky (forgot the spelling). She is super mean and always trying to get the twins in trouble. And at the end of most book there is the school’s newspaper, ‘Acorn’ (wow I remembered the name) where the characters have written. Ashley who’s into fashion writes for the ‘Fashion Weekly’ column whereas Mary-Kate writes for the sports column since she’s a softball star. Dana mostly writes gossips. I remember her slogan, “If you want the scoop, you got to snoop”. 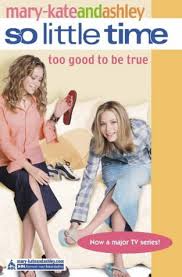 Another series of Mary-Kate and Ashley is “So little time”. I got the 3rd part of this series as a present, so that was the first book I read in this series. There are 17 parts in this series and I’m proud to say I have all of them! (right here in my mini library at home) . In this series the twins appear as “Riley and Chloe Carlson” and they are a bit older than they were at the boarding school. However, there is no direct link between these series.

Sweet Sixteen is the next series of these twins. This time they use their real names, Mary Kate and Ashley Olsen. And as the name suggests, they are 16 years old. In fact, the first two parts in this book describes the hectic days they spend in preparing the most fabulous sweet sixteenth birthday party ever. And the series goes on portraying the trials and tribulations they face throughout the year. 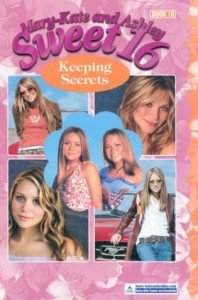