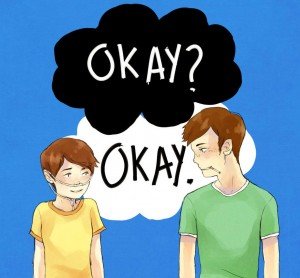 Finally, I read it and it was amazing. (10th October)

I couldn’t believe my eyes. I opened the package and there it was! The book I hear a lot about. I took it out and immediately sent a thank you to my sister E. I haven’t read a novel in a long time and with the familiar book-ish smell it felt so good to hold one in my hand. However I kept the book for a few days until I got a peaceful good day to read it.

Maybe I had my hopes up. At first, the book didn’t strike me as fabulous as I have thought it would. Or maybe it could be because of the school days. Anyway, I started to fall in love when they were about to leave Indianapolis. Amsterdam is magical indeed. I really love that trip. Even the flight part.

I could picture Amsterdam so well. It felt as if I went back in time into this peaceful, beautiful, wonderful place. The elm trees, its seed falling through the air, the beautiful canals, and the view from the outdoor restaurant was so breathtaking. ( yeah i saw :P) I just loved those scenes. Their silly yet so meaningful conversations included.

“Some infinities are bigger than other infinities.”

When Peter Van Houten said this, I didn’t get it. Even after I thought about it later, still couldn’t get it. It was when Hazel read her eulogy I understood what it meant. And it was a beautiful quote indeed. Plus this is my favourite one as well.

Speaking of Van Houten, he was nothing like I expected either. I imagined a very decent man in a suit who would be really glad to meet them. I don’t think anyone would have imagined him as a drunk. Hats off to John Green!

So many things crossed my mind as I was reading it. I wondered how my life would be if I were blind. Poor Isaac. It must be so hard for him even with user-friendly computer systems.

“When the scientists of the future show up at my house with robot eyes and they tell me to try them on , I will tell the scientists to screw off, because I do not want to see a world without him (Augustus)” That was my favourite and most touching line from him.

As Augustus was getting sicker and sicker, I was unable put the book down. I was bracing myself for a massive tragedy with each turning page. When he was at the gas station, losing consciousness, I thought that was it. I thought he was going to be admitted in hospital and die right away. What a relief it was when he didn’t die! However it came as a sudden shock in Chapter 21 when I read the first sentence. I re-read it unable to believe that he actually died.

The world’s not a wish granting factory indeed.

I am going to watch the movie soon. And the best part about watching the movie after reading the story is, finding out if the characters you had dressed in mind appear the same or different. 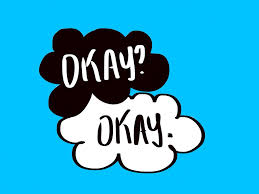 PS: Cool bookmarks. Okay? At first I couldn’t figure out what this was about. I thought the bookmark was saying “Ok, you wanna stop reading for now and place it here? Okay… “Even after Gus says, “Maybe Okay will be our ‘Always’”, I still couldn’t figure it out. It was actually much later. Actually when an FB friend upload her PP with this “Okay, Okay?” it finally HIT me. I was like, “wow, how could I have been so stupid. It was right there the whole time!”

5 thoughts on “The Fault in ‘their’ Stars”