We had been planning to host a prefect day since a long time ago. In fact it was in our mind since the last prefect day that was held in our school. The challenging part was to think of a better one than the previous year. So we held a brainstorming session and sparked up lots of brilliant-silly ideas. We thought of making a children’s evening with different stalls, an ice-cream selling day, and picnic trip to a nearby island. We even thought of a “Prefect-teacher day” where all the prefects can pretend to be teachers and teach in classes. The thing we wanted to do most was to camp in an island but there were some technical problems. So at the end it all came down to a weekend camp at school! We planned like crazy to get everything done in time, juggling home works, extra classes, exams and everything else. But it all went down great.

Everyone arrived at 4:15 on Friday evening. It was so fun to see everyone coming with heavy backpacks, mats and sleeping bags with excited looks on their faces. I can still remember how thrilled I was about the fact that the three of us were going to lead this camp.

After the campers had put their belongings in their “camping site” they gathered around us.  The three of us sorted them into 4 groups and gave them ribbons to be tied on their wrist. We explained them the rules and the agenda of the camp. 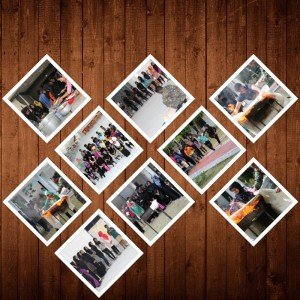 So the first event was the Treasure Hunt. The group who finds all the clues and finds the final treasure will get the prize. Treasure hunt was so fun to watch. Everyone was running around, dashing up and down the stairs, climbing the trees and turning everything upside down. We even put fake clues in places where it will be really difficult to reach. So by the time they get it, they will realize all the climbing was for nothing. Ha-ha!  Within minutes they were all breathless. They required a little bit of assistance in solving the riddles. As I recall it was the orange team who won.

The next big event was a barbeque that night. Before that we freshened up, prayed Maqrib, recited and hung out with each other. I was pranked by two of my friends. (lets not go there). We played small games in the hall like, lava baazy and miming and stuff. It was so fun, shouting and laughing and messing around.

But it was such a bummer, because it started raining and it was really difficult to get the barbecue done. But after what seemed like a million years of starvation we managed to get some chicken legs and sausages. We thank the hardworking team for preparing it including the ladies who got all the roshi prepared. Thank you!

So after dinner we all went to “sleep”. I’m not sure how much sleep they got ‘cause I slept for like 2 hours. I don’t know about the other grades but let me tell you a bit about what happened in our room. 😉

After having some midnight snacks and talking a bit, some went to sleep. I sure couldn’t because I and some friends were too busy laughing about the “Uh-uhoon” moment that evening. Plus the “Burugaa fiasco” too ;). Then my side kick and I planned to paint all their faces with lipstick before they wake up. We managed to give some great make-overs for some of them. I didn’t feel sleepy but decided to get an hour or two of sleep because the next morning there was going to be a tough exercise drill by cadets. So I dozed off, but was woken up when I felt the flash of camera on my eyes. I covered my face just in time. My evil side kick back stabbed me and painted my face too!!! Ha-ha. And some idiot kept “Bangi-govanings” all throughout the night. 😉

Rise and Shine! Hurry lets go to the cadet exercise drill. Boy was that hilarious! But a bit tiring to do all that ridiculous exercises! It was fun screaming and cheering for your group members to finish the race.

After breakfast, we cleaned the hall a bit for the first aid session. It was my first, first-aid class, so I was extremely thrilled. After a bit of theory, they showed us how to put the patient in the safety position and how to do CPR. The whole session was very informative.

Then after some snacks and juice there was a life skill program by two teachers from our school. We played some games and prepared skids in that session. Going home for lunch pretty much killed the camp feeling but it was the best thing to do. After lunch, we had a fire fighting class, including the practical as well. It was so exhilarating to lay the blanket over that roaring fire!

After that, we played some games, like slow cycling, getting out of circle game and relay. Everyone was very tired and sleepy after all the activities. After having evening tea in the hall it was time to go home.

Well that’s the overview. Now let’s draw the back curtains and see what’s behind there.

Yes! We know, we know it didn’t reach up to your expectations. We know it wasn’t as cool as you had hoped. We know at sometimes you were all very bored, tired and sleepy. But we did the best we could; given the time frame we had to plan it. The three of us did it by juggling home works, extra classes, exams and everything else. We spent the whole Friday morning placing the clues all around the school, cleaning the classrooms, and preparing all the necessary things. We are really sorry for not giving you the camp of a lifetime. But hey, in every event there are positive points and negative ones right?

And I hope you don’t regret that weekend. Because everything is an experience, be it good or bad. You had all surely gotten some experience with living with different people, sharing a bathroom and sleeping place. And who knows, one day you may have to plan a camp so now you know what and what not to give importance.

Even though it was the school captain, the other deputy captain and I who arranged the whole thing, we couldn’t have done it without a lot of helping hands. For example, our beloved Abdulla Sir, for being there for us to provide all sorts of help in numerous occasions. Plus the awesome people who made the juice, roshi and the hardworking team of guys who helped with the barbecue.  Moreover I would like to thank the group of teachers who stayed on guard while we slept safely in the school. Thanks guys!