You see, well, I have written this post over an year ago. I don’t know why I didn’t post it back then. I think I waited to add some extra paragraphs. But now when I read it, it seemed good to go. And here is the weird part. No sooner than I have written it, there were news that J.K Rowling was planning to write a “……” (I forgot the word…is it prologue?) about Harry Potter. You know the period of time when James Potter’s batch when to Hogwarts.

Well this post was written just ramble on and on about harry potter stuff.

How many of you hate Snape? Well I did at first. I hated him for a long time, until I read the chapter Half-blood Prince. I felt so sad after I read that part and my hatred towards him vanished. The part where Voldemort kills him is so heartbreaking. It was as if a close person died. Anyway, he’s not dead in my imaginary world woohoo!

The prisoner of Azkaban

So what do u think of Sirius Black? I’m so in love with him. Well, in the third part he may appear as untidy and filthy but in the 6th part he’s so damn gorgeous. But what a pity! He also dies so soon! Why is everyone dying in this thing! 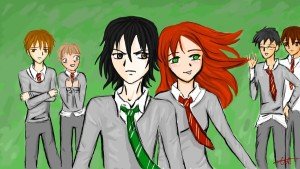 Yeah the big bad bully whose the son of two death eaters eh? Well there’s something appealing in him. All the sadness and sorrow within him makes him really hot. Keke. Well you have to admit, without Malfoy, there would be less spice in it.

Who wouldn’t agree that he is the best Defence against the dark arts teacher! I enjoyed his classes immensely. It would be so fun in the Bogart’s class. I am dying to try that ‘Ridikulas spell’! They also find his end of year exams the most enjoyable. They were so practical and fun! In the story book, the under the Willow tree scene is really interesting. Its long and full of details and I enjoyed every sentence.

I wish someone would make a movie about another batch of Hogwarts students, like Harry’s dad’s generation. Then we’ll see how mischievous his father and Sirius black was. How much they bullied Snape. And we can see all the fun things they did while hiding under the Cloak. Transforming every full moon with Lupin must have been epic. But poor Lupin, he must have been in so much pain.