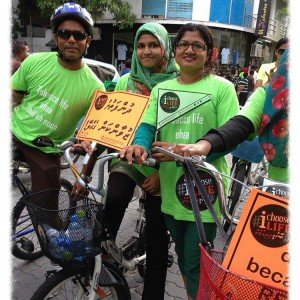 Last year around this time, I was seeing pictures of people riding around Male’. This really fascinated me. I really loved the idea of bringing back the bike era into the modern day. Because these are the days in Maldives where people think that engines are cool, motorcycles are way fashionable and cars are more awesome than simple bikes. The parking racks which were once over stocked with bicycles are now replaced with motorcycles. The evening rides which were dominated by bikes are now boisterous with motorized vehicles. Even the morning school rush hour has more engines than pedals.

However, nowadays the developed countries prefer cycling than driving. They are finding cycling as one of the key solution for a greener future. And I believe eventually Maldivians will adapt the same idea too. Because it always follows a similar trend. First we think doing something is uncool. Like riding a bike and when the foreign people and famous celebrities start to pick up the habit again, we start to see the beauty in it. I’m sure it’s just a matter of time before the Youth starts preferring cycling than driving. Just imagine, we used to go everywhere in bikes before engines took over. Why can’t we do it now? Surely the distance between two places didn’t increase over time. I don’t mean we should stop using motorized vehicles altogether but to those places where we can easily travel, why not ride a bike or take a walk? Some people are too blind to see the awesomeness of the bikes.

I went to my first Bike Maldives bike ride in July 26th. Yep the “Minivan 50” ride held in the morning that day. I and my sister went to “Artificial Beach” around 5:30 or 6 AM. The colourful decorative lights were still on as it was dark. The hectic streets of Male’ were extremely quite at that time of the day and it was a serene couple of minutes. The vehicle-free streets would make one wish the streets to be like that at all times.

The ride was pretty exciting. All the bikes were decorated with red, green and white balloons, flags and light sticks. Stickers and other accessories were passed around too. It was shown on TV as well.

The next big Bike event I went was the #IChooseLifeCampaign walk/bike ride. We gathered at the Social Centre to help distribute T-shirts and help around. We wore green T-shirts in that event and rode the full Majeedhee Magu as far as I remember. It culminated in “Artificial Beach” where there was something like a zumba dance session as the final number. On the way home, I strongly recall being really careful while riding. The busy streets were really scary. Even though it’s fun and safe to ride the bike in traffic controlled routes, the normal streets were a whole different story.

The thing about riding bicycle in Male’ compared to in the island is that you have to be constantly alert. You cannot let your mind rest in the busy streets of Male’. Back in island, when I set out to go to school, all I have to do is let the legs do all the work and let my mind wander into another world. Luckily nothing disastrous happened so far. Hehe.

The next big event was the Tourism Day ride, where we wore a red T.shirt. it ended near “Tsunami Binaa” place and there were coconuts as refreshments. It was also shown live on TV. Bike stunts were also carried out by some talented people there. I remember being really tired after this event.

Bike Maldives also rides in Hulhumale’ in almost every Friday but I have never been to a Hulhumale’ ride before. It always looks so jolly from the pictures. They ride around, take great pictures and wrap it up with a big outdoor breakfast. 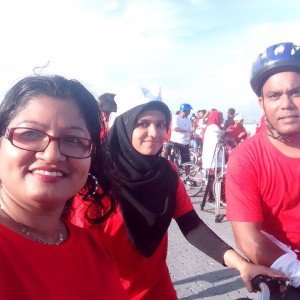 In kulhudhuffishi I and my friends organized a bike ride in November 25th of last year. You might remember the orange campaign held against violence against women. Does 16 days of activism ring a bell? Yeah, so that bike ride was held in Addu, Kulhudhuffushi and Male at the same time. The experience in organizing that event was fantastic. I had a great time even though there were some setbacks. And we managed to gather a good crowd for that ride.

Recently Bike Maldives celebrated their 1 year anniversary. It doesn’t feel like one year though as they had done so much great things within such a short period. I wish Bike Maldives a very prosperous future up ahead. May they get successful by each passing year.

Since we are constantly on the look-out for sustainable ways for a greener tomorrow, I hope the trend of bike riding starts to get caught in the Maldivian wind soon. 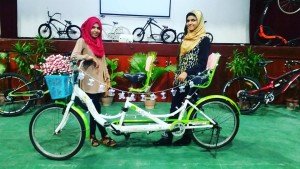