We made a deal earlier this year. In each of our birthdays, we agreed to give a treat to all the members of our group.

The January birth day treat initiated the tradition that continued for the rest of the year. We were really excited that night. Because we were getting together for a little fun time, as well as some major colour splashing event. Haha. Sherry suspected something fishy was going on there while we were in the living room. It was hard to pretend nothing tricky was going to happen. But we kept reassuring her that we are not going to soak her with water or something. Finally, when Mandy arrived, we went to the dining area to find delicious looking spaghetti and a bowl of devil fish. It was indeed delicious. The juice and the yummy fruit cocktail dessert were just perfect as well. So after stuffing all that, we tried to think of a wicked plan to take her outside into the yard. 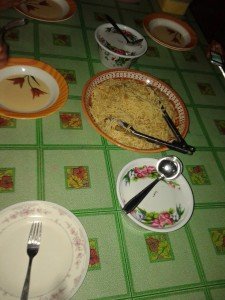 After what seemed like ages, we managed to get her outside, near the joali. Then we pounced on her like a bunch of crazy clowns, and tied her up. It was a rough battle I must say. Then there came the gooey ooey green colour. It was splashed down over her and she looked like one of those Eid Maali you see at Mashimaali parade. I am stopping myself with the details here, before I mention the sound effects. Oops too late. 😉

So as agreed, Amanda gave us a little treat too. When we arrived at her house we were surprised to see a party filled with black and white balloons and all. She said it was a surprise party planned by her family. So we had a blast! Oooh and we wore party hats too. That was so cool. After eating the yummy noodles and custards it was time for a group picture. I still remember the Colgate guy’s smile. Haha. Oh and hey guys, remember the mini heart attack we all got because of the “CCTV story”.

Ashley was a bit late in preparing the party due to some technical problems. The “bullies” bullied her a bit about being too late :v . But it was so worth the wait! Because the spaghetti was amazing! Just amazing! After eating we hung out in her room a little bit. Although it was very late, we didn’t feel like leaving, because a “season” kind of started.

I recall Stacy being very late. I forgive you :*. And I remember very clearly the continues chatter in the dining room. The gossip continued for hours, didn’t it! I’m still sorry I couldn’t make the treat as you have expected. But I hope you liked the bird <3

I have no idea why, but I remember hungrily waiting for Mandy’s invitation. We had so much fun that night and got a great advice from Paapaa too. The food was delicious and I think we ate up almost everything. Oh and of course there was the crazy photo-shoot as well.

Oh joyous June! Double birthday treat by Shannon and Isabella. Since their birthdays got caught up in the exam days, it was postponed to a later day. So first, we went to Shannon’s house on that Ramazaan night. It was fun and the food was delicious. We started putting food on plate in the order old to young. Poor November girl (Sofia) had to tolerate her growling stomach. We managed to finish before our hardworking guy friends came along. One of them came straight from the “gym”.

Then we waited for what seemed like ages for Isabella to make her call. When it comes to food, everyone gets impatient right? Yeah so finally, we got the invitation in another Ramazaan night to Isabella’s house. But sadly, Shannon could not make it because she was sick. We really missed her. So after dinner we made a 30 second sukooth dedicated to her, to think about her. But of course we ended up laughing hysterically or maybe it was just me who couldn’t control the laughter. Awful people we are, aren’t we?  Oh and the other fun thing about that night was packing every single thing we ate for her; the pasta, fish, juice and ice-cream. Even a supari packet too! (But she doesn’t eat supari and neither do I). We even filled up a water bottle. I bet the ice-cream was all melted by the time it reached her house.

I’m sorry I won’t be there for you guys’ birthday. But look at the bright side; more food for you!  Wish I could be there but looks like you have to make a sukooth. Laugh all through it ok? :V

I will never forget you guys and I will always be in touch.

“We may be far apart,

But you’ll always be,

Right here in my heart,

Hope this friendship will last a lifetime and don’t let anyone sink this ship, ok?!