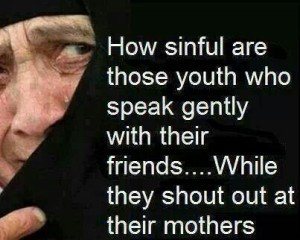 This is a very broad topic and can be written endlessly. So this article mainly highlights the importance of not blaming our parents for what has happened to us.

It just makes me furious to see people who are even educated and people who are capable of differentiating what’s right and wrong, disrespecting their parents. They treat them like they are dirt. They scold, yell and criticize them in a way that those poor parents feel so disheartened. I mean who do they think they are! Being so self-centered and heartless! Have they forgotten that their parents are the reason why they have become who they are?  Why they have reached to the points they are today? Why they have been able to go to schools and colleges and get a life of they are own? If their parents haven’t raised them the way they had, where would they be today? 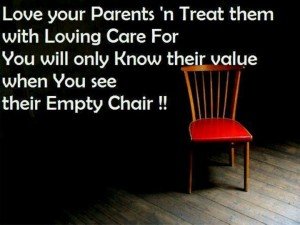 No one is perfect. Each of us has our own faults and flaws. Even our parents. And no parent in this world could nurture their child to become the BEST human being in every aspect. We can’t expect them to raise us to become the masters in everything. They can’t teach us everything. So we can’t blame them for every flaw, for every negative trait we have. Have you searched your soul and identified bad things about you and blamed your parents for not teaching you better? Were you angry that they haven’t taught you better than that? Well we can’t put the blame on them. Because they teach us from what they have been taught. From the knowledge they have gained and from the experience they got from their lives. If we are blaming them for whatever is wrong with ourselves and for whatever unlucky things that have ever happened to us, then we should be ready to face the same blame from our future children.

Just think about it. Back then, the lifestyles, level of education, the extent of awareness about abuses, and about so many other things was very low, compared to today. They might not have been educated well and may not have been able to provide you opportunities for studying. They might have believed abusing children is a way of punishing them for bad behavior. They might not have been able to spend some quality time with you because they were too busy raising so many other kids. They could not have given each of us the same level of attention, advice and guidance. That doesn’t give you the right to take revenge on them. So, what matters now is that WE are educated! We know what’s right and what’s wrong. We should know it’s not right to blame them or punish them for however they have raised us. Because, they are our PARENTS for god’s sake! And it’s our job to respect them despite their actions. 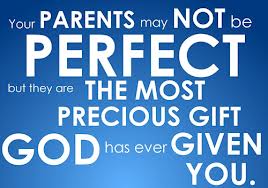 5 thoughts on “Respect Your Parents!”