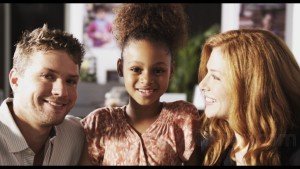 The name didn’t scream much detail. Reclaiming what? A house? Money? It was just a word. I didn’t think about it. The movie started when the couple drove up to this city where they were meeting the foster kid. After paying what seemed like to be a fortune, they got the kid. I was wondering, what could possibly happen in this movie. They got a kid and now they are a happy little family. I looked at the cursor which has moved an inch from the screen and thought woah, something awesome will surely happen. So they were almost set to go to start a new beginning at their country. But, since they had to wait for the kid’s passport, they couldn’t just go.

The movie started taking shape when the kid disappeared from their apartment. Apparently she was reclaimed. That’s what the police told them.

See it was this “game” where fake group of people claiming to be important people make a fake, real looking website and gets money when the kids are “adopted”. The poor innocent kids are kidnapped and brainwashed to play the “game”. The movie portrays the couples’s struggles in getting back the child. Why don’t you watch it to get a better explanation. The ending is really cool. When you think all the chaos is over, it starts all over again and the bad guy keeps on coming, chasing after you. Seriously, it will keep you on the edge of your seat.

Overall it’s a good watch. It opens your eyes to this horrible world even more and keep you pondering about the poor little kids that are kidnapped all over the world for all kinds of purposes. Just think about it. If its shown in movies, how awful would it be in real life.