Two years ago today, an anti-apartheid revolutionary, politician, and philanthropist  who served as the first black president of South Africa passed away. His government played a significant role in dismantling the legacy of apartheid through tackling institutionalized racism and fostering racial reconciliation. He was an indefatigable citizen who worked tirelessly to make his country a better place. During his life, he faced a lot of challenges including imprisonment. For 20 years he directed a campaign of peaceful, nonviolent defiance against the South African government and its racist policies.

He is a legacy who deserved to be remembered and we should all learn a thing or two from his struggles. For those who want an overview of his life, hope this blog piece suits your interest.

Please note that most of them are directly quoted from the website www.biography.com

Place of Birth: Mvezo, on the banks of the Mbashe River in Transkei, South Africa.

Served as the Principal counselor to the Acting King of Thembu people tribal chiefs for several years, but lost both his title and fortune over a dispute with the local colonial magistrate.

His father’s loss of status forced his mother to move his family to Qunu, a much smaller village.

One website quotes that his father passed away when Nelson was 9 years old while the others say that he was 12.

When he was adopted, he left Qunu and started his life in the royal residence of Thembuland.

Adopted by: Chief Jongintabo Daylindyebo, who was the acting regent of Thembu.

Mandela took classes in a one-room school next to the palace, studying English, Xhosa, history and geography. It was during this period that Mandela developed an interest in African history, from elder chiefs who came to the Great Palace on official business. He learned how the African people had lived in relative peace until the coming of the white people. According to the elders, the children of South Africa had previously lived as brothers, but white men had shattered this fellowship. While black men shared their land, air and water with whites, white men took all of these things for themselves. 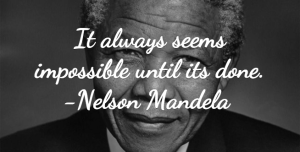 He entered manhood by the traditional African ritual.

Apart from academics, he also excelled at track and boxing.

1st year at college: He focused on Roman Dutch Law to prepare for a career in civil service as an interpreter or a clerk. (best profession a black man could attain at that time)

He could not complete his degree as he was expelled for joining in a student protest.

Within the right of Regent Jongintaba, as the custom dictated his guardian (Jongintaba) arranged a marriage for Nelson Mandela.

He was shocked by the news of marriage and felt trapped.

He settled in Johansenburg and attended jobs as clerks and guards. He also completed his bachelor’s degree via correspondence courses. He then enrolled at the University of Witwatersrand in Johannesburg to study law.

Within the congress a small group of young Africans banded together forming African National Youth League. ( something like our little NGOs)

For 20 years, Mandela directed peaceful, nonviolent acts of defiance against the South African government and its racist policies, including the

At around 37 years of age (1956) Mandela and 150 others were arrested and charged with treason for their political advocacy.

In 1961, Mandela, who was formerly committed to nonviolent protest, began to believe that armed struggle was the only way to achieve change. He subsequently co-founded Umkhonto we Sizwe, also known as MK, an armed offshoot of the ANC dedicated to sabotage and guerilla war tactics to end apartheid. In 1961, Mandela orchestrated a three-day national workers’ strike. He was arrested for leading the strike the following year, and was sentenced to five years in prison. In 1963, Mandela was brought to trial again. This time, he and 10 other ANC leaders were sentenced to life imprisonment for political offenses, including sabotage.

Incarcerated in Robben island for 18 of his 27 years of prison.

In 1982, Mandela and other ANC leaders were moved to Pollsmoor Prison, allegedly to enable contact between them and the South African government. 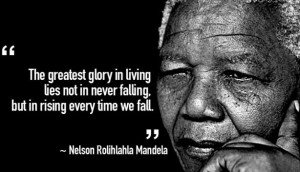 Mandela and President de Klerk were jointly awarded the Nobel Peace Prize for their work toward dismantling apartheid.

Awarded the Order of Merit

Although he retired from active politics he maintained a busy schedule by continuing to serve his country:

He announced his formal retirement from public life and returned to his native village of Qunu. 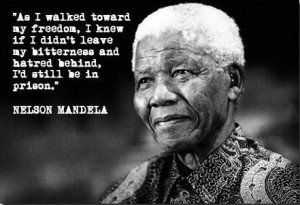 It was declared as Mandela Day, an international day to promote global peace and celebrate the South African leader’s legacy.

Last Public Appearance at the final match on World Cup 2010 in South Africa.

This remarkable citizen who advocated for peace and equality on both a national and global scale, passed away in Johannesburg, South Africa

A statement on the Nelson Mandela Centre of Memory’s website reads: “Mr. Mandela gave 67 years of his life fighting for the rights of humanity. All we are asking is that everyone gives 67 minutes of their time, whether it’s supporting your chosen charity or serving your local community.”