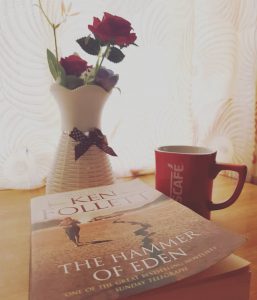 Its about a group of people who lives in Silver City Valley and their attempts to save their valley from destruction. Governor of California ordered to build power plants near the valley. And that means their commune will be flooded and they would lose their homes. So Ricky and his gang comes up with a plan to blackmail the governor by threatening to cause an earthquake. Yeah an artificial earthquake.

Then the story shows FBI agent Judy’s hard work in trying to stop them. These parts were super exciting.

As always , it’s a different book. I don’t remember reading a book like this. I thought this might be a good time to get some information about FBI or earthquakes so I went ahead. And I did end up learning quite a bit. And I was today years old when I found out that human can cause earthquakes using seismic vibrators.

They have replaced the real names of the criminals in commune with fake names which I found very interesting. Like, Star, Flower, Song, Bones..etc

Comparing Melanie and Star, I thought at first Star was going to be the main crazy evil woman but turns out its Melanie.

He is a smart psychopath criminal in terms of convincing people, getting what he wants from others by deceit and how he communicates. But he’s really stupid but that’s obviously because he’s been living off the modern world in a commune for decades. A place where there are no TV or newspapers. He hates watching news. According to him, it adds stress and worries which you can’t do anything about. So the reason I’m saying he’s stupid is he calls a government building to check the time of the press conference. And he had no idea that they can trace the call in nanoseconds. And he also makes tones of mistakes throughout that make him a stupid criminal. I guess no one is smart as Scofield

I didn’t know (……) was going to die. (In case you want to read it, I didn’t want to spoil it) Actually I didn’t have time to predict how it was going to end. It went so fast. I just thought Ricky Granger (Priest) was going to get arrested at the last scene and it disappointed me to find out that he escaped even after the gun shot. But I’m glad at least he dies on the next chapter.

When the book ended it left me with such awe that I wished there was a second part. A part where Flower would grow up and become a criminal. And by that time Star would be out of jail and maybe Priest would be seen too. Maybe he failed the suicide attempt because maybe someone rescued him at the last minute. Oh and Dusty and Flower could end up together and it would end up in a terrible mess. How awesome would that be.

So which novel have you been reading lately?