Well this was the day when we had to depart from Japan. So Shajan and I planned to wake up extremely early to make the best of the day. You are not going to believe how early the sunrises, when we were there. The time difference is 4 hours so when it’s around 5 AM the sun will be shining pretty bright.

Anyway so we planned to wake up early. But did we? After staying up till 1-2AM we overslept. The huge soft bed swallowed me making me stay there. But before the wake-up call, we got out of the room and made ourselves towards the breakfast hall. The long route we had to take was really beautiful. There were so many trees and colourful flowers. We took a lot of pictures along the way. Boy, was that fun! We saw a beautiful wedding couple as well. 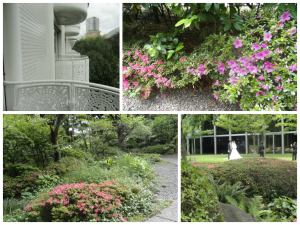 So we had our last breakfast there and on the way, we took some more crazy pictures. Everyone, including the Srilankan group and Afganistan group, gathered at the lounge after the breakfast. There were the last minute Selfies and group pics and crazy poses. We exchanged the rest of the souveniers. I still have a keychain a Srilankan girl gave me. I sat with Shajan on the bus and watched as Japan flew past. After the plane ride, it was time to resurface into the reality.