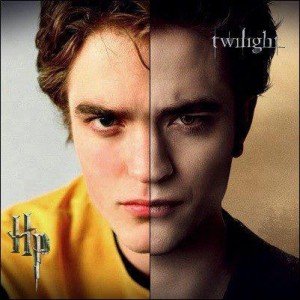 Reading a story is fun. But what’s even more fun is talking about the story with someone else who have read it. So yeah, those days I was so excited about this harry potter and I wanted my sister, N, to get addicted to it too. When I watch harry potter I make her sit with me sometimes and try to explain the awesomeness in it.  Unfortunately she just doesn’t like Harry Potter. Those hocus pocus magic stuff. She loves gooey romantic movies where the couples run off to sunset in the end. Then I asked her ”why Twilight? It has magic in it?”

Yeah she is a die-hard fan of twilight. Me? I’m the opposite. I kind of doesn’t like it. I hate Bella Swan and her stupidity so much that….aaargh…. I don’t even like Bella and Edward together. I wished it was Bella and Jacob. I do criticize, but somehow I end up watching it when it’s shown in Fox Movies. And I have to admit that some scenes are pretty awesome, like the baseball scene in the first part. Also, the final scene where James get beaten and burnt. However I don’t find the 3rd and the 4th part that cool.

Ok so I thought and thought about how I could convince my sister to watch harry potter. Then it hit me!

Robert Pattinson! Cedric in HP, and Edward in Twilight. So I told her, even Edward has a role in it. However, I did not tell her he appear in just one part. So after a lot of coaxing, she finally agreed to read it. After reading “Philosopher’s stone” she said, “not bad.” I got my hopes up since she started “Chamber of secrets.” But she told me it wasn’t her type and wasn’t just that into HP. So I finally gave up on the convincing mission. But I did manage to talk her into watching another series I love. Muahahaha.

Somehow I love Cedric but resents Edward. Don’t know why. Maybe the younger version of him seems cuter. I have to admit, I enjoyed reading the first two novels of Twilight. Then I got lazy and couldn’t finish the last two parts. Compared to the movie, story book is better.

Here are some interesting memes i saw. hehe 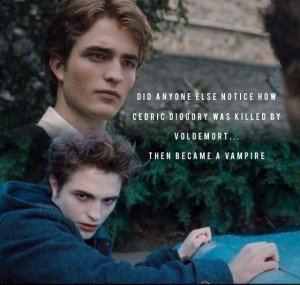 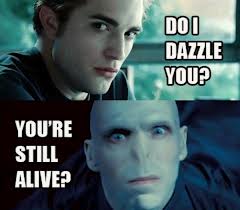 2 thoughts on “Cedric VS Edward”