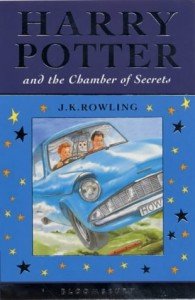 The first book I read in the series was the Chamber of secrets. This blue book with the flying car was there on the table one day and I took it and opened it to the first chapter. “The worst Birthday”. After reading the first page I was compelled to read the second, then the third and so it went. I got so addicted to it. It was as if J.K Rowling put a spell on me.

And that, my dear friends, is how my love story began 😉 was that grade 6 holidays? or 7th year? hmmm.. dont remember well

You know harry potter is an awesome film. There are almost equal number of people in my life who loves and dislikes harry potter. I used to feel so enraged when they say HP is stupid. But then I knew why they must hate it. It’s because the film is with so little details. They dont understand what it is all about. To be honest, I like the story book more than the films. I think. Well it’s because it’s far more detailed. And it brings out feelings and over time, a strong bond between you and the characters will be created. Simply marvelous.

I just wish the films are as detailed as the story. So many scenes are cut, especially those awesome Quidditch matches. Of course, the film will be way too long with all those parts but I don’t care. Good for us eh? About the last two parts, (movie) well, I wish the scenes were a bit lighter. It was too damn dark and maybe that’s why my –hatefans- doesn’t like it. 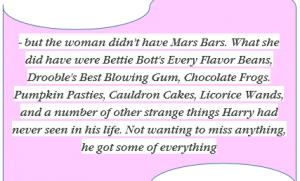 I just love the fact that J.K Rowling has described the scenes with the food really well. Ha-ha. By the time I finished reading the paragraph about that food cart in the train (Philosopher’s stone) my mouth was watering. Not to mention about the huge feasts they have. I so want to use the invisibility cloak and sneak some food from there. 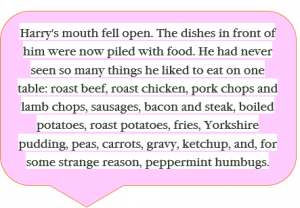 Charms, Potions, Transfiguration? I like charms. It would be really fun in Flitwick’s class learning all those spells. Potion is also fine but the thought of drinking the gooey disgusting muck makes me sick. Would you drink that Polyjuice Potion with hair? yuck! But in my imaginary world I love to attend all the classes. Hagrid’s magical creature classes are well, so far boring, except Buckbeak classes. I would love to go for a ride on it. Damn that would be epic. About Divination? I agree with Hermione. Its stupid. End of story.

PS. I have a feeling Im gonna get addicted writing about HP too ,,, cya