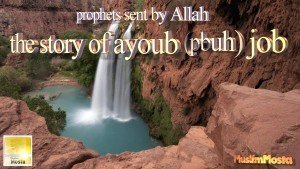 If we look deeply into the lives of the prophets, we learn a great deal from each of them. Their lives are filled with invaluable lessons and their struggles are an inspiration. As I was reading the stories of the prophets in the chronological order, the story of Ayoub (pbuh) intrigued me immensely. I think we can all learn a very important lesson from him.

(The English name for Ayoub is Job btw)

He was a patient man who was always remembering Allah in thankfulness. A man, so patient and repentant that Iblis got jealous of him when the Angles and Allah praised him.

Iblis wanted Ayoub to reject Allah, so one by one, he destroyed what Ayoub had. First, his wealth, then his children and then his health. When his wealth was taken from him Iblis told him.

“All your wealth is lost. Some people say that it is because you gave too much charity and that you are wasting your time with your continuous prayers to Allah. Others say that Allah has brought this upon you in order to please your enemies. If Allah had the capacity to prevent harm, then He would have protected your wealth.”

True to his belief, Job replied: “What Allah has taken away from me belongs to Him. I was only its trustee for a while. He gives to whom He wills and withholds from whom He wills.” With these words, Job again prostrated to his Lord.

When his children were taken from him, his response to Iblis was:

“Allah sometimes gives and sometimes takes. He is sometimes pleased and sometimes displeased with our deeds. Whether a thing is beneficial or harmful to me, I will remain firm in my belief and remain thankful to my Creator.”

Then the Iblis targeted his health and made it worse. At first his wife stayed to comfort him but as years passed, Iblis weakend her faith. So she asked Ayoub to ask Allah to save him from the distress. But he replied:
“Tell me, how long did I enjoy good health and riches?”

She replied: “For eighty years.”

Then Job asked: “How long am I suffering like this?”

She said: “For seven years.”

Job then told her: “In that case I am ashamed to call on my Lord to remove the hardship, for I have not suffered longer than the years of good health and plenty.”

See, this is the part where we can relate. He was a good man who was continuously worshiping Allah. But when disaster struck, did he complain about how unlucky he is? Did he say that he was doing all the good deeds all those times yet that is how his life has turned out? No, he did not. Neither when his children were taken from him nor when his state of health weakened to such an extent that his friends and visitors were disgusted of him. He never complained. He kept worshiping Allah.

But look at us. For instance, let’s look at a life of a typical student. He or she may complain that he is not getting good grades no matter how much he studies. He may be completing his homework, doing the past papers and revising thoroughly. But at the end he may not see the desired result. What happens usually is, he complains. He curses and starts giving up on his dreams. But look at Ayoub (pbuh). He was doing everything right too; praying, thanking Allah, giving charities etc. But when the horrible things happened to him, did he complain? Did he turn his back on Allah? No he did not! And neither should we! He had faith. He knew that in life, good and bad things will happen. All he had to do was be patient and move on.

That is what we should keep in mind too. We have to accept the bad things in life and believe that good things will also happen. It will not always be sunshine and rainbows. There are stormy days too. We just have to be patient. Because what we are facing in our lives today is nothing compared to the battles and hardships they had to face. So we should be able to handle such stuffs.

Here is a brief Summary of his life taken from Alim.org

Ibn Asaker narrated: “Job was a man having much wealth of all kinds: beasts, slaves, sheep, vast lands of Haran and many children. All those favors were taken from him and he was physically afflicted as well. Never a single organ was sound except his heart and tongue, with both of which he glorified Allah, the Almighty all the time day and night. His disease lasted for a long time until his visitors felt disgusted with him. His friends kept away from him, and people abstained from visiting him. No one felt sympathy for him except his wife. She took good care of him, knowing his former charity and pity for her.”

2 thoughts on “A lesson From Ayoub (pbuh)”