2013 has been the most thrilling, adventurous and totally awesome year ever. Until August 2014 I would have said 2013 was the best so far. But I have to admit that the past couple of months had been 2013-happiness-level too. So let’s dive back into those experience-full days.

When I said dive, I literally meant dive. January 13 was the day I went diving for the first time ever! Well, I didn’t suit up with full diving gear but I wore a stone belt and shared the oxygen tank with the instructor. It was pretty epic for a beginner.

Yes I’m telling the truth, believe me. We went on a safari trip with my niece/nephew/sis and her family and there was a French couple who are diving instructors. It was a 3 day trip and the 3rd day was the best. We went to a finolhu and had a great time in the water. We swam in the deep blues as well!

So I went with the French lady who was really nice. We were halfway down to the seabed when the pressure on my ears became unbearable. Similar to what you experience in aero planes but only much worse. I just couldn’t make the pain go away, so I told her I didn’t want to go further down. So we came back to the surface. True, I didn’t see colourful corals and eels and exotic fishes but I did see the underwater life somewhat. I remember seeing a fish eating on a skeleton of a fish. The couple of minutes under there was super! That was like a once in a lifetime opportunity so I’m so thankful for that. Plus that was the time when I learned to swim, so yay! I had a great swimming coach though 😉

Ok, so let’s roll on to the next new experience. Yep, this time too, I literally meant roll.

Rollerblades! My awesome nieces taught me this. You are not going to believe but they were barely 12 and they could rollerblade like pros. It was so scary at first and I fell on my butt more than a couple of times. I even used a broomstick for my balance. But eventually, with the help of my awesome “coaches” I got the hang of it. It was so incredible, even though I didn’t get that good at it. Like I said, it was an experience. We used to come up to the terrace for the adventures back then. Miss you:*

So whats next? Hmm, yes! The Hulhumale trip. The highlight of the trip was riding a motorcycle on my own! Shhhhhh….dont tell the cops. It wasn’t that hard, maybe because I got the whole road to myself. Haha. Anyway, the whole thing was pretty cool.

The next new thing was the Cinema! Schwack Cinema was the first cinema I went to watch a movie. Dabanng-2 was what we watched, even though I’m not exactly a fan of hindi movie. It had subtitles so I understood it. The film wasn’t bad either. I enjoyed the popcorn. ( Psst, thanks for taking me there ok? ) The next movie I watched was Fathis handhuvaru in 3D!! That’s was my first 3D movie, not to mention the Maldives Premiere as well. So that was cool. 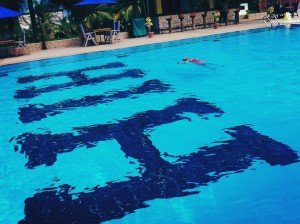 Oh and how can I forget about Ney Year? 1st January came with a big surprise. My sister A, took us to HIH!! I wasn’t excited at first, because that’s so typical of me. Not getting thrilled at an awesome idea at first and almost losing out a great opportunity. But I did go since my nieces/nephew were so freaking excited. I still remember them jumping up and down at the idea. Ok so HIH is Hulhule Island Hotel. That was the first time I been to a swimming pool! ( It was like being in a Vice City scene 😉 )We spent 5 hours in the pool. It was so fantastic! I got all the time in the world to practice my swimming but, since it wasn’t salt water, it was very difficult to float. I enjoyed the submarine-chocmilkshake break very much. Thank you awesome sis A!